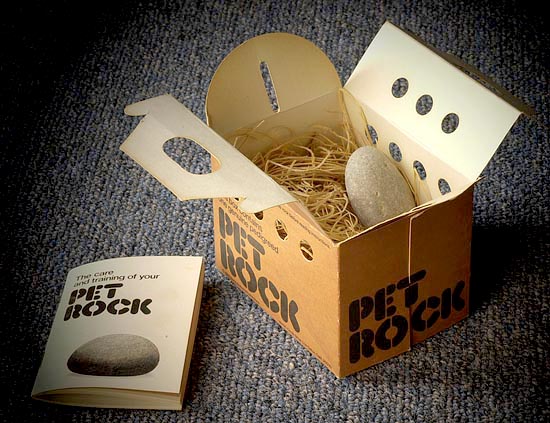 Alon Feder, founder of Key Advertising LLC considers Pet Rocks to be the ultimate example of pure marketing. In the 1970s, Gary Dahl put television commercials advertising a simple river rock for $3.95 to keep as a pet. At least it came in a cozy little box with some plastic tinsel and a 4-color instruction manual about how to keep it happy. Anyone could have gone to a nearby stream, picked up a rock and kept it as a pet. But Gary Dahl made millions from this brilliant marketing phenomenon. Imagine all the kids who wanted a puppy for their birthday that year…”Here son, learn to take care of this cute little rock first.”

In 1975, Gary Dahl working as an advertising executive at the time, launched the sale of the pet rock which quickly transformed him into a multi-millionaire. This enormous profit is much more impressive considering it only took him six months to achieve his multi-millionaire status and the extremely low cost of the product.

The pet rock sold for $3.95 and estimates state Dahl sold over 5 million of his pet rocks in a six month period. Even more, each pet rock was purchased for a few pennies and Dahl estimated that the packaging and accompanying manual cost him under 30 cents per rock in bulk to produce. Therefore, assuming incidentals and delivery cost Dahl another 65 cents per rock, then Dahl was profiting 3 dollars per rock. With these totals Dahl earned over 15 million dollars during a six month period in 1975 which would be estimated at $56,166,419.02 today.

Dahl’s somewhat innovative marketing involved commonplace gray pebbles, purchased from a construction supplier, which were then sold to the public as live pets. The idea Dahl stated, was inspired by the hassle, mess, and money that pets such as dogs, cats and fish require. 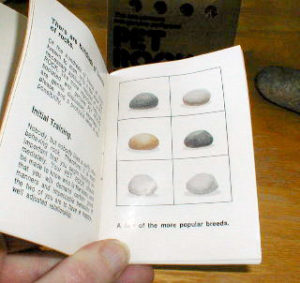 Dahl began by creating the company called “Rock Bottom Productions.” He imported the rocks from Rosarito Beach in Baja, California, Mexico. Packaging for the rock included a “Pet Training Manual” and a card board box, designed like a pet carrier. The pet training manual contained instructions on how to properly care for one’s pet, including how to house train a pet rock by placing it on a piece of newspaper and other commands including sit, stay, roll over, play dead, and come.

Part of Dahl’s marketing strategy was to state that pet rocks give us more pleasure than we know. He convinced the consumer that these pet rocks support this argument through their very existence, and clearly display that it is not an actual item that brings joy to the child in the human mind, but merely the idea of the item. The pet sits in a niche in the mind, created by the power of the owners’ imaginations. It is in the actual exercise of the mind that such pleasure is found.

It is quite a valid point that finding such productive and effective uses of recreation time can be more preventative and beneficial to the health of our minds than even the most advanced psychological treatments. People who purchased these unusual “pets” often gave them names, talked to them, petted them, and attempted to teach them to perform simple “tricks”.

How do you take a 1-cent rock and sell it for roughly $4.00? It’s all in the packaging and accompanying marketing materials and strategies… A box to call home (with air holes, of course), a manual on taking care of your new pet… and brilliant use of the media and marketing strategies. Dahl’s idea was simple, effective and highly successful similar to other fads such as the Hula Hoop and Cabbage Patch Kids. With the pet rocks resurgence comes inspiration to create the next multi-million dollar opportunity. As indicated by Dahl all that is needed is a good idea, a thorough plan, hard work, and good marketing!